Skip to content
Home/Old Man Mountain, Robert Axle Project, Thru Axle/Do I Have A Thru-Axle or a Skewer?
Previous Next

Do I Have A Thru-Axle or a Skewer?

The differences between a thru axle and a skewer.

We get quite a few questions about the difference between an older style quick release skewer and a newer thru-axle. Thru-axles have been in mountain bikes for nearly five years now, and are now moving into road and cross bikes. But there are still many bikes that have skewers. Learn a little about the difference.

Way back in 1927, Italian bike racer Tullio Campagnolo (yes, that “Campy”) was frustrated when he was racing and attempted to change gears in a race. At that time there was one cog on each side of the hub, so “changing gears” meant that you had to undo the wingnuts that held the wheel on, then take the wheel off, flip it around, and reinstall it by threading the nuts back on. You can see that during a race, this was an arduous process.

So, like a good bike fanatics, he invented a solution – the quick release skewer, which allowed him to quickly change his wheel. The “quick release”, or QR, skewer was a thin rod that went into an axle that was inside the hub. Since then, the 5mm quick release skewer became the industry standard on bicycles. A QR is 5mm thick and is steel. It looks something like this:

Right about 2011, as disc brakes and suspension proliferated in mountain bikes, the thru axle started to replace the old skewer. Beefy suspension forks called for a stiffer connection with the wheel and disc brakes required smaller tolerances for the wheel to sit properly in the frame so the brakes did not rub. Front thru axles generally went to 15mm in diameter in the front, and the common rear axle went to 12mm in diameter. Like this: 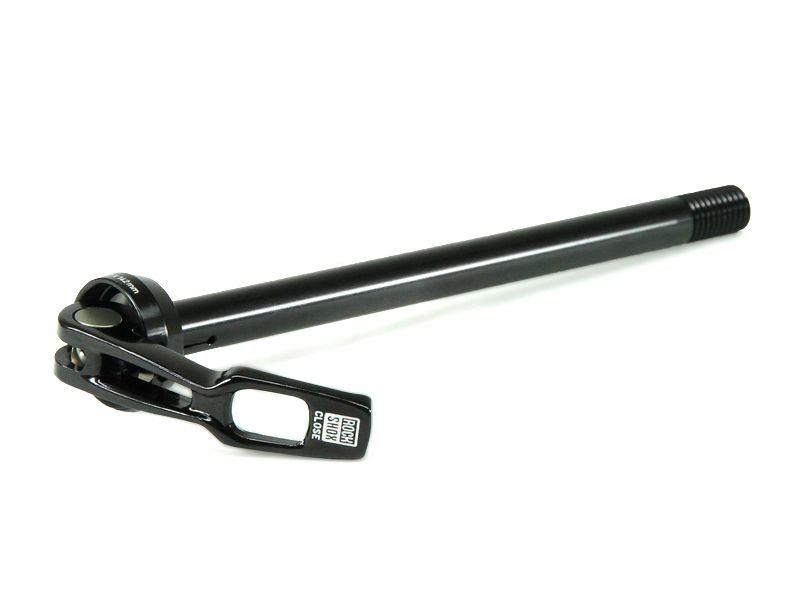 Some thru axles have a cam-looking lever and some are lower profile and bolt-on. However, thru axles are different than a skewer because rather than using a camming mechanism to hold the wheel on, a thru axle threads directly into your bike frame. Your bike has a thru axle if the “drop out” is a hole, rather than a U-shaped dropout.  This provides added security because even if the lever on the end of the thru axle flips open, it is still threaded into the frame, holding your wheel on. If stay up on bike news, you may have heard about the very widespread recall of bikes that have a front quick release combined with disc brakes.

Is there a performance difference? YES. Thru axles provide a stiffer ride, which can be beneficial in both the front and rear of a bike. In mountain bikes in particular, this allows for more torque and less flex for your whip.

A word of caution: In the early life of thru axles, some bike manufacturers went with a 10mm thru-axle. These are fairly rare, but we have seen some cases. If you have any question about your axle being 10mm in diameter, be sure to measure it using our Fitment Guide.

About the Author: Erik Fenner

Learn More
X
Join Waitlist You all really like us! Sign up here are we'll be sure to email you when they are back in stock.
Go to Top